Idyllic scenes of family life, brave soldiers, heroic labourers and songs of praise to the Great Leader. The exhibition The Kim Utopia - Paintings from North Korea at the Drents Museum provides a unique glimpse behind the North Korean curtain through a collection of about 80 paintings and works on paper. The paintings were produced by professional North Korean painters in State employment in the period between 1960 and 2010. The exhibition, which will be held from 3 April until 30 August, will show how the regime used socialist-realistic art to create and maintain a utopian North Korea. The photo exhibition North Korean Perspectives will also be hosted by the Museum in the same period.

Idealized society
The exhibition is based on works from a unique Dutch private collection owned by collector Ronald de Groen. For twenty years, a specially appointed group of North Koreans searched the country for high-quality socialist-realistic art. The paintings illustrate a North Korean society that was orchestrated and idealized by the State: the Kim Utopia. Important themes include the Great Leader, heroic resistance and patriotism, industrial and scientific progress and agricultural fertility.

Art as a political medium
Under the visionary leadership of Kim Il Sung (Eternal President of the Republic, 1912-1994) this utopian North Korea managed to shed the burden of the past.
The Kim Utopia illustrates how North Koreans could work freely towards a paradisal future. At the same time, the works in the exhibition demonstrate the power of art as a political medium and the interwovenness of art and politics, as we have also seen in Soviet Russia and Maoist China. The Kim Utopia is the fourth exhibition in the series International Realism at the Drents Museum.

The Kim Utopia was developed in collaboration with Dr Koen De Ceuster of the Leiden Institute of Area Studies, Leiden University. De Ceuster is an international authority in the field of North Korean art and culture policy. The exhibition will be accompanied by a publication that is also entitled The Kim Utopia, published by WBOOKS, Zwolle. The book will be available at the Museum Shop for € 24,95. 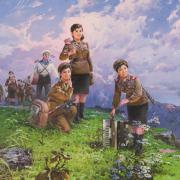 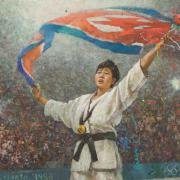 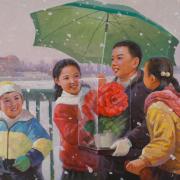